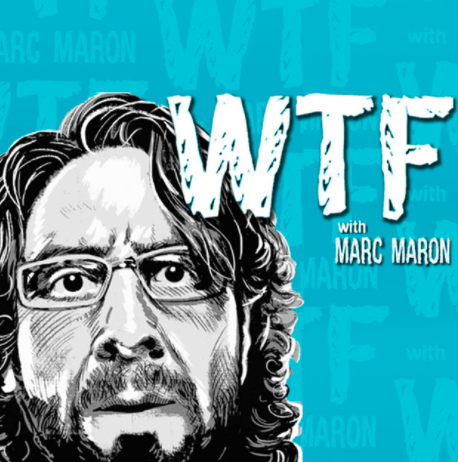 I’ve been having a hard time nailing down what it is about WTF with Marc Maron that I love so much, but let me try.

He’ll sometimes meander into a four minute story about some divey place he used to do standup or some guitar he’s trying to find strings for, or he’ll skip talking about what the interview subject is most famous for and talk about their cats or their opinion of Delta’s airline food, before jumping to talking about the interviewee’s shitty father or their struggle with addiction. He tells you what he thinks of the state of New Jersey (he likes it and feels like it’s a part of him even though he hasn’t lived there since early childhood) or some fish restaurant in Seattle (he likes the fried scallops quite a bit).

He’s a celebrity now at 54, but wasn’t for a long time. He rambles for 15 minutes before each interview in a stream-of-consciousness half-rant-half-self-therapy session that should drive me nuts, but that I love. He’s lived an interesting life himself that he’s not afraid to share with guests and the “what the fucksters, what the fuckaneers,” as he calls his listeners. He’s a curmudgeon who can’t help but be so genuinely and deeply interested in everyone he talks to, and the hour-long conversations end up being riveting, though in the opposite way that a Terry Gross interview is.  I totally recommend listening to interviews of the same person by both Gross and Maron. (Bruce Springsteen, Greta Gerwig, and Sarah Silverman have all been on both shows.) If Gross’s interview is a dinner at a five-star restaurant, where the conversation progresses through a series of thoughtful questions from the amouse bouche to the creme brulee, the WTF interview is more like hour nine of a 16-hour road trip, where you’re eating sunflower seeds and beef jerky and drinking gas station coffee, telling stories in the front seat of a Honda Civic about your family’s yearly Thanksgiving fight or about the time you shit yourself in third grade, like you’re in a stinky, cramped confessional and both far away from home, so why not?

Two recent WTF’s I listened to and recommend: interviews with Jenna Fischer and another with Pete Davidson. I listened to them both on a sub-zero day driving east on Route 80 with my husband (and no kids…) and was totally distracted from the bleak winter corn fields and my New Year’s Day hangover. I picked those interviews because I liked The Office and SNL, and by the end of the trip they’d talked about everything from how grief and trauma can screw up kids to the Stanislavsky acting method to borderline personality disorder.

I think in a good life, you need both the fancy dinners and the long road trips, and you definitely need both WTF and Fresh Air on your playlist. Maron and Gross get to the place where you find out the most interesting, vulnerable, and honest things about people, though only after WTF will you be able to call yourself a “what-the-fuck-buddy.”